Tackling a tough subject is a daunting task. Many people read to escape and may not want to explore subjects that make them uncomfortable. Although my book has a love story, Kayla’s bulimia and anorexia is central to the story. A girl starving herself and binging and purging can’t be romanticized.

My goal with The Disappearing Girl is to make people think about their words. Kayla’s mom is very obsessed with beauty and her harsh comments are one of the reasons Kayla’s eating habits spiral out of control. As Kayla remarks in the book, she was far from innocent though, she had sat around with her friends and judged other girls on their weight fluctuations.

I didn’t want to come off as preachy in my novel and I think that is important with any book dealing with a tough topic. Instead, I thought it was important to explore the emotions of someone who develops an eating disorder because she believes it will fix everything wrong in her life. The reason I wrote the book in first person was because I wanted readers to see inside Kayla’s head. They may get upset with her and wish she would snap out of it but I hope they gain an understanding of why she can’t stop her extreme dieting.

When writing about a tough topic, research is key. Although I’m familiar with the feelings of taking extreme steps to lose weight, I wanted to use other stories and experiences. I read A LOT in order to see what others have gone through and also to learn about the treatments used for eating disorder patients.

Finally, I think the most important thing to remember when writing about a tough subject is to make the characters and plot believable. If you’re including things like rape, suicide and abuse, only for shock value, it is going to leave readers with a bad taste in their mouth. Explore the topic in a meaningful and respectful way to make it work well for your book.

Heather Topham Wood’s obsession with novels began in childhood while growing up in a shore town in New Jersey. Writing since her teens, she recently returned to penning novels after a successful career as a freelance writer. She’s the author of the paranormal romance Second Sight series and the standalone The Disappearing Girl.

Heather graduated from the College of New Jersey in 2005 and holds a bachelor’s degree in English. Her freelance work has appeared in publications such as USA Today,Livestrong.com, Outlook by the Bay and Step in Style magazine. She resides in Trenton, New Jersey with her husband and two sons. Besides writing, Heather is a pop culture fanatic and has an obsession with supernatural novels and TV shows. 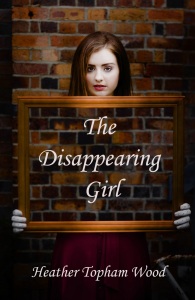 Every day this week, I am featuring a different author on my blog as part of the Blogger Book Fair. Check back tomorrow for another author.