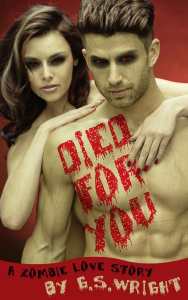 Available digitally on Amazon, Died for You – A Zombie Love Story

An unconventional romance with blood, brains, and a whole lot of bite!!!

In a not too distant future, humans find sanctuary in small communities like Refuge. But not everything is as it seems. Rumors of Zombie Shepherds hint at a questionable fate for the living, and the zombie masters rule from their glass tower.

Before the apocalypse, Jude was a rising indie singer and songwriter taking the world by storm. Now he’s just trying to survive in a world where other humans are sometimes more dangerous than the monsters.

Jude has lived in anonymity for five years until his biggest fan recognizes him… and she just happens to be a zombie. Now Jude is plunged into a world where both the hungry dead and the ambitious living are out to kill him. Zombie Girl is proving to be an unlikely ally, but can he trust her enough to survive?

Or will she be the death of him?