Halloween is getting closer! Yay! How about a quick promotion?

Spilling Blood, Episode 1 is free today through October 29th. You can grab it on Amazon for your kindle ereader by clicking here.

Also, you can also get episodes 2 through 12 for $.99 each through Halloween.

What do you do when pirates kidnap you for a ransom and a mad scientist injects you with a powerful and inevitably fatal concoction of aether?

You get revenge.
Matilda Katrine Myra is no one special, but her pirate abductors don’t know that. When they boldly kidnap her from an airship and sweep her away into the deadly wasteland of mutants and poisonous radiation, her life becomes a day to day battle to evade death.

And she’s much closer to death than ever. A mad scientist has injected her with toxic condensed aether, the air of the gods, and now she’ll need frequent doses just to survive each day. With a dwindling supply, she’ll have to battle mutants, mad scientists, pirates, and the spirits of the dead.

The tool of her fate, a gauntlet feeding the condensed aether into her veins, is also a potent weapon. It can focus the aether into a death ray. She can also see the dead, women who suffered the fate Matilda is fighting to avoid.

Along with a wasteland traveler and his clockwork dragon as her only allies, and despite the powers gifted to her by the aether, the one thing she doesn’t have is time.

Jump on over to Amazon and grab your digital copy! The paperback will be out in a few weeks.

Sign up here to get an email when my next book is released: http://eepurl.com/bmlfd 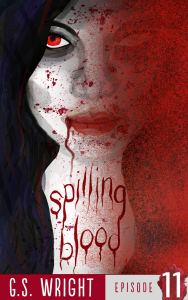 In Season III, the Game Changes
Taken to the very brink of death, Emily rises again. With new abilities. New alliances. And deadly new enemies.
Emily Steel will be tested to her limits as evil rises to consume her city.
Being a vampire just got deadly.

Vampires…
They’ve walked among us for centuries…
Lurking in the shadows…
Thirsting…
In Spilling Blood Season III, Emily’s struggle to survive as one of the undead continues. The events from last season have left her damaged. Can she trust the Dragon’s promise to help her learn her full potential?
Or does he only seek to possess her?
Season III is here, with all new threats and thrills, twisted horror, and dark lust.
It all begins with Episode 11. Season III is four episodes, with each book 50% longer than previous seasons.

Spilling Blood is a serial, with each part like a television episode, and the episodes collected in seasons.
Have you read the first ten episodes to Spilling Blood? This book is Episode 11, and starts Season III.

If you haven’t read Season I (episodes 1-4) or Season II (episodes 5-10), they are available episodically or in novel format.

Sign up here to get an email when my next book is released: http://eepurl.com/bmlfdD

Get this on Amazon!

Emily is a prisoner of the upír. Drained of blood and dumped in a pit, she is not alone. Her enemy, Maggie, is there with her, and only one of them can escape.

Ravager has returned to the werewolf pack and the mate he left behind. Though they welcome him back after thirty years, their alpha, Stormfang, wants something in return, a secret Ravager has kept since his death.

Ambrogino, the hunter, closes in on the location of the vampire lord. It is his last chance to get the monster before his own life is forfeit.

Enemies New and Old Are Everywhere 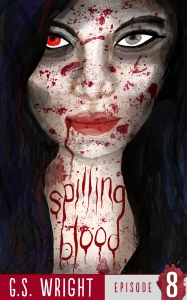 Emily can no longer run from her fate. Everyone, both vampire and human, want her dead, including someone she once called friend.
Wolf can longer run from his past. He is the Ravager, and his old pack has returned. They made the mistake of not killing him. Now they’ve tracked him down to finish the job.

A prisoner of the upír, Maggie begins her metamorphosis. If she survives, she will never be the same.

Events have been put in motion, a face from Season I returns, and no vampire will be the same.

Here’s the current release schedule for my Works in Progress…

Spilling Blood Season II is on a monthly release schedule. Episode 6 will be released this month (Nov.), followed by Episode 7 in time for Christmas. The series will continue monthly through March 2015, followed by the release of the complete series in a complete book.

The Apocalypse Witch will return in 2015. 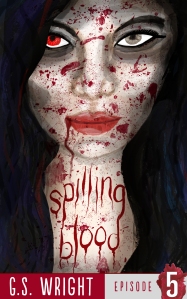 Night is about to get a lot more interesting.

It has been one year since the events of Season I. Emily Steel, still a young and inexperienced vampire, struggles to deal with her new existence, feeling homesick and distant from the life she has lost. Her only companion is an undead werewolf.

Where once she feared vampires, Emily now fears the uncertainty of an unlife she doesn’t fully understand, and the hunger for the blood of the living which cannot be denied.

Despite her vampiric urges, Emily finds herself with feelings for a mortal. Though he too has feelings for her, Emily knows it is but a matter of time before he realizes what she is… a monster.

Yet there are forces gathering. Dark shadows move across the night sky. Vampires are disappearing. A hunter has arrived, and Emily is his target.

Spilling Blood is a serial, with each part like a television episode, and the episodes collected in seasons.

Season II will include Episode 5 through Episode 10.

New to the series? Try Episode 1 for Free!

Last year vampires kidnapped Emily Steele from her life, taking her away from school and boyfriend, and plunging her into a nightmare of blood and demonic lust.

This year, the nightmare returns, but Emily is no longer a victim.

Spilling Blood, Season II plunges the reader back into the world of bloodthirsty vampires. Emily’s supernatural abilities give her a sense of confidence she’s never known before, but it can’t restore her to her family. With more enemies than allies among the dead, she will have to pull upon every ounce of strength she possesses not avoid death a second time.

And there are other things in the night. New horrors have arrived that hunt the dead… and eat them.

Spilling Blood Season II returns as a serial, picking up at Episode 5. Watch for it’s release by Monday, August 25th. There will be a total of 6 episodes in the new season, making it 30% longer than Season I. 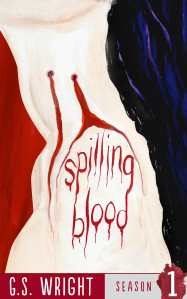 Spilling Blood Season I is available now in one complete book (best deal) or in individual episodes.

It’s been a very long time since I’ve done a Monday update. At one time I intended to post my weekly word count on my works in process, along with how many words I’d written for the year.

To be honest, I have been distracted for the last few months by other projects. I think it’s time to return to my books.

Currently I am working on my three series and one stand-alone novel.

Out of my three series, this one is the most complicated. If you read Death Storm & the sequel, Death’s Reach, there are many, many story-lines that must be brought to the conclusion. I had originally hoped to get it done by the end of this summer, but I have constantly let myself get distracted with other projects. My current goal for this book is by the end of the year. I am setting the goal of a 50,000 word book, though I expect it to surpass that length.

Last year around October I released Spilling Blood, Season I. I put out one episode a week for four weeks, releasing the collection around Halloween. This year, I’m going to release the new episodes as I can. I’m not going to keep to a weekly schedule as life’s schedule is interfering. However, it will be longer, with two additional episodes. Season II will encompass episodes 5 through 10, with each episode of the serial around 10,000 words.

Here’s a teaser of the cover:

I started this series a few months ago, with the idea of writing them quickly. That didn’t happen. Book 3 has not gotten the attention it needs. Each book of the Apocalypse Witch serial will continue around 20,000 words.

This is a stand-alone novel and is nearing completion. If you liked Broken Things and haven’t really gotten into my genre writing, you’ll probably like SOUL SISTER. You’ll be hearing more about this book in the very near future.

Check out the cover: 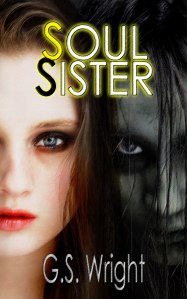 Argh. What can I say? I am nowhere near meeting this writing goal. If you recall, my purpose was to write 1 million words over the course of this year. I am currently at 201,669 words, only about 20% of the way there and with just over four months to make up the difference. I might redo this goal for 2015, but I’m not giving up on it until midnight nears on December 31st.

With a little luck and motivation, I’ll have a new Monday update next week, with impressive word counts.

The tale of the Apocalypse Witch continues…

Matilda is a young woman, just entering adulthood. At one time, she had her entire future in front of her. But now she is dying, her life is slipping away by the very thing keeping her alive – aether.

To make things worse, what little time she has left is not her own. Twelve angry apparitions of murdered women seek revenge, something they can only get through Matilda.

Now, Matilda must travel across a savage wasteland of mutants and monsters to seek out the scientist who poisoned her and killed the others – before her time runs out.